In July 2018 P4EC supported implementation Camp Model United Nations, a 7-days long summer activitity for teenagers from all over Ukraine. Consortium of the implementing organizations and camp counselors created an unforgettalbe experience for young people. 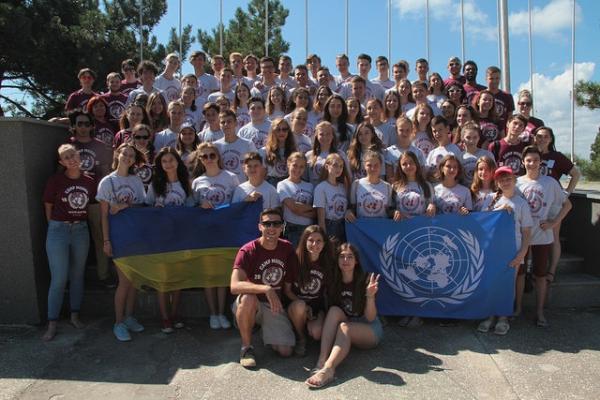 On July 11-18, 2018, Partnership for Every Child had the honor of supporting Camp Model United Nations that took place in Odesa.

60 campers and 20 counselors alike convened at national campground “Moloda Gvardia” for 7 days of diplomacy and fun in the sun united by the idea to bring attention back to the IDP population in Ukraine, with a focus on empowerment, international diplomacy and civic engagement. Respectively, campers comprised of the future leaders from all over Ukraine, about 30% of which were internally displaced young people or youngsters currently residing within the conflict zone in the East.

In groups of four youth represented 15 different countries, attempting to act in accordance with the norms, interests and political agenda of these countries. Each group had representatives of four UN committees and, as the camp days were going by, campers sat together in individual as well as joint committee sessions discussing the ‘burning’ topics that are in focus of these committees in real life, namely:

Campers gave impassioned speeches and engaged in fierce debates at times, but the atmosphere was always one of cordiality and mutual respect. The resolutions passed on these subjects by the end of the camp were reached democratically and vetted analytically by all involved.

LEARNING AND HAVING FUN

Other than committee sessions, campers attended educational activities conducted and delivered by camp partners, including seminars on IDP/refugee sensitivity and tolerance, IDP/refugee protection, structure and core mandate of UNHCR, the Rights of the Child and a session of “Enter Dignityland” game. They also actively participated in workshops that were organized by their counselors and touched important topics related to core camp activities, such as United Nations Sustainable Goals, Research and Academic Integrity, Project Design and Management.

It wasn’t all about critical thinking, however. In their free time, campers were encouraged to cool off in the Black Sea and take part in a number of morning and evening electives. Among the activities campers elected to broaden their horizons with were: Salsa and Spanish class, Basics of Improv, Sex Education, World Cup viewing parties, Henna tattooing, board games, UNSC Overview, Opportunities for Youth Seminar, running, baseball, football, basketball, Frisbee, yoga, swimming, and volleyball.

Campers also took part in a talent show, international trivia night, dance parties, and a bonfire on the beach with s’mores to celebrate their final night. Overall, it was a fantastic week where lifelong friendships were formed, critical thinking was practiced, and fun was had by all.

Active engagement and active fun of the youngsters was captured by camp’s media team, so everyone can visualize this incredible experience by the watching official camp video (credit: Lindsey Newhall) and scrolling though photo album (credit: Matthew Yarbrough).

The camp team consisting of Camp Directors (Peace Corps Volunteers Evan DeaKyne and Holly Turano and a Ukrainian Volunteer Nastya Halyko), grant writers and administrative assistants (Peace Corps Volunteers John Lillegard and Connor O’Brien), counselors and, of course, the youth who were the soul of the camp turned the latter into a huge success. Using this momentum, a working group is being established by Peace Corps Volunteer John Lillegard, in order to facilitate more widespread and accessible Model UN camps and simulations on a national scale throughout Ukraine. A mini-Model UN is already planned to take place in Novi Petrivtsi at the end of August.

The camp was made possible by a massive coordination of efforts from a variety of spheres within Ukraine, from NGOs and government organizations (Peace Corps, “Dzherelo Nadii” (“Spring of Hope”), “Moloda Gvardiya” (Young Guard), the UN Youth Advisory Panel and UNHCR implementing partner “Desyate Kvitnya”), project initiator Peace Corps Youth Development Volunteer of Novi Petrivtsi Center of Social Services for Families, Children and Youth, Peace Corps Ukraine Youth Development Program Lead Natasha Bykova whose recruitment effort brought together internally displaced youngsters from different communities of Ukraine. The camp was implemented with the financial support of two Peace Corps-led Let Girls Learn grants and individual donations, which made this incredible experience for the teenagers free of charge.

Camp Model United Nations is a summer camp for Ukrainian youth. The main goal of the camp is to expand the worldview of the campers and educate them on the importance of global cooperation. Campers research and represent an assigned country and then discuss and debate political, social, and economic issues contextually as delegates of those countries during a Model UN simulation.